The Dow Jones plummeted nearly 800 points on Monday, as Donald Trump’s improved poll numbers increase the likelihood of a contested election. As coronavirus cases surge, Dow bulls are facing up to the fact that turbulent politics will push out a much-needed stimulus package weeks or even months.

The only piece of significant domestic data released Monday was new home sales, which surprised declined unexpectedly at a rate of 3.5%. Despite slowing sales, prices increased as low mortgage rates continue to underpin demand.

Coronavirus concerns are once again spiking with infection rates around the world, as major European economies like the U.K., Germany, and France are all imposing more stringent lockdowns. In the U.S., the average daily count is at all-time highs, leaving Wall Street fearful that similar precautions may resume.

One positive for the Dow Jones is that the major economic centers of New York City and California have yet to see a second wave. Should they see spikes on France or Italy’s scale, there is the potential for a dramatic chilling of risk sentiment.

CNBC’s Jim Cramer gives his take on the impact of a second wave in the video below: 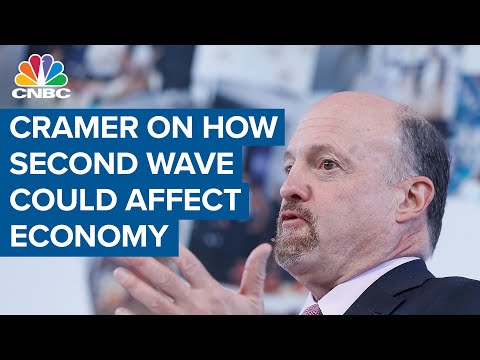 While we are seeing nations attempt to stifle the spread of the virus through more localized and tentative restrictions, it seems highly likely that we will eventually see a swathe of nationwide lockdowns if the trajectory cannot be reversed. With travel stocks such as TUI and Carnival getting hit in early trade, it is clear that traders are preparing for a raft of more restrictive measures.

Vaccine headlines continue to show progress, but good news from AstraZeneca had little impact on the broader markets.

Political tensions continue to mount on Wall Street. Bulls are finally pricing in the possibility that a fiscal deal could be months away. Deadlock in Congress persists, as it has for weeks, making a pre-election stimulus deal highly unlikely.

As Donald Trump’s polling deficit to Joe Biden narrows slightly, the chance of a contested election has increased after the final debate.

Such an outcome pushes an aid package out even further when all the evidence suggests it is desperately needed now.

On a terrible day for the Dow 30, there were severe losses across several sectors. Boeing’s stock tumbled more than 4% as its partner airlines were crushed by the prospect of delayed fiscal aid and the possibility of weaker demand for their services.

Caterpillar’s stock was also down heavily, as the barometer for global growth turns south amid European lockdowns.

UnitedHealth, the most heavily weighted stock in the Dow Jones, fell around 3%. Apple was one of the better performers, posting a mere 1% loss.