Meghan Markle & Prince Harry Epitomise Fake It ’Til You Make It!

Prince Harry and Meghan Markle really are the epitome of the “fake it ’til you make it” brigade.

Not only have they tried to position themselves as experts on hot-button social matters, but now they’re using what has been described as “intellectual gestures.”

Honestly, where will it end?

Both Meghan Markle and Prince Harry are finding themselves in situations where they have to converse with actual experts on social matters, so they have to try at least to appear as though they know what they’re talking about.

The word-salad approach has been serving them well thus far, but you can’t just ramble on without looking the part!

And looking the part is apparently part of the plan going by the couple’s body language at the TIME 100 talks.

There were signs that the couple are moving into more deep-thinking and intellectual waters than Harry possibly encountered during his time spent in royal palaces. The chin-stroke or touch is a gesture often linked to a more intellectual approach, and while Harry stroked his beard at one point, Meghan listened to him while adopting the gesture of resting her chin on the knuckles of one hand.

I found it rather interesting that Judi James describes Meghan Markle as calm and confident during these exchanges.

I guess that makes sense, as even a bad actor knows how to keep their cool when the cameras are rolling.

Poor old Prince Harry, though? Not so much, it would seem.

When Harry is not in speak mode though, he performs a stream of fidgets, ranging from eye-stutters, sucking and chewing his lips, fiddling with his ring, face-scratching, and pulling at his shirt and his jacket. Some heavy swallowing and the eye-stutters suggest tension or anxiety is making his mouth dry, and his adrenalin rise. The clothing tugging suggests he is very concerned how he is coming across and self-correcting his appearance, maybe even studying himself on the screen first.

As much as I hold Prince Harry utterly responsible for the position he finds himself in today, I have to say, should we expect anything else from him other than a nervous, lackluster performance?

He’s not a professional actor. Which means he’s not skilled in the art of b*llsh*tting on camera.

That type of world is where Meghan Markle belongs, not a British prince in his thirties who’s never had to pretend he’s something he isn’t in front of an audience. 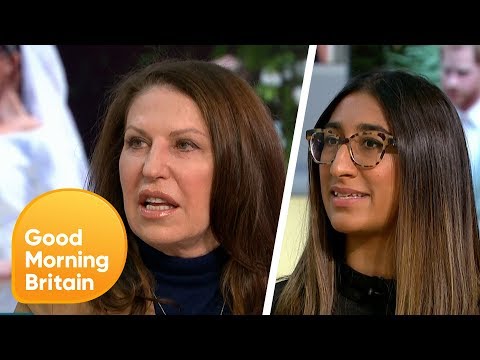 This is the world Meghan Markle feels most comfortable in

I have zero doubts that Meghan is loving life right now. She’s entirely in her element.

In many ways, she’s already won. She got her fairytale $40 million wedding for free, she got her easily-influenced prince, she got her royal title without having to put any work in, and now she’s back home in the epicenter of falseness and self-importance.

I wonder how long Prince Harry can keep up in a world that he knows, deep down, is entirely alien to him.

The royal family receives many criticisms, and much of it is justified, but one thing that Prince Harry nor his brother, Prince William, were raised to do was lie and talk nonsense on camera.

He knows that what he’s selling isn’t legit. It’s only a matter of time before it becomes too much for him.

I doubt Meghan Markle will care by that point.