The president made the announcement early this morning on his Twitter page not long after it was revealed that his top aide, Hope Hicks, also tested positive for the virus. It’s believed that Hicks had symptoms of the disease before she disclosed her diagnosis.

This diagnosis amounts to the most serious health threat to a sitting president in decades. And it’s the most ironic, considering he’s called Covid-19 a ‘new hoax’ the Democrats are pushing. Worse still, he convinced an entire group of people of the same thing — putting their lives and everyone else’s lives in danger — creating a pandemic of epic proportions.

Donald Trump Tested Positive For A Virus He Called a ‘Hoax’

Let’s go back in time to February 28, 2020, when Donald Trump called COVID-19 “their new hoax” at a rally in Charlottesville, NC. 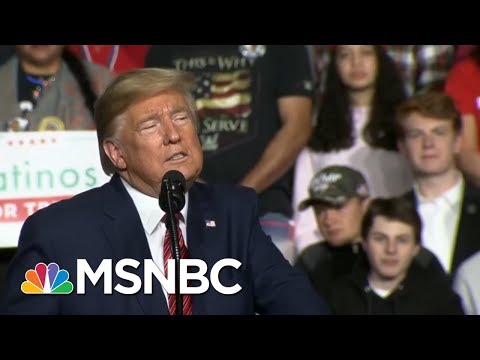 In the past, as well, he’s downplayed the severity of the virus, claimed it would “all go away” when the summer comes, and consistently and repeatedly refused to wear a mask — even as recently as yesterday when he and Vice President Michael Pence paid a visit to the Cleveland Clinic.

And he continued to share baseless theories and self-adulating praise in the face of financial collapse, a rising death toll, and a pandemic that raged out of control.

Funny, too, how Donald Trump supporters — the same ones who perpetuated lie after lie about COVID-19, and its severity, while swearing it was nothing more than a globalist plot orchestrated by George Soros to impeach the president — are now calling for “prayers” for the president in the hopes that he gets better.

It goes without saying, though, that the requests for prayers are falling a little short.

The Trump Presidency Is In Danger

Leaving the politics of the matter aside, the fact is, Donald Trump and his presidency are currently in danger.

The diagnosis amounts to the most serious known health threat to a sitting American president in decades. At 74 years old and obese, Trump falls into the highest risk category for serious complications from the disease, which has killed more than 200,000 Americans and more than 1 million people worldwide. His infection with the disease could prove destabilizing in an already fraught political climate, and stock market futures tumbled on news of Trump’s infection.

If Donald Trump is deemed unfit to serve due to his health, it’s only logical that the 25th Amendment would be enacted, and Mike Pence would be sworn in as president. Unless, of course, Pence himself also tests positive for COVID-19 — in which case, the Speaker of the House, one Nancy Pelosi, will be sworn in.

If Trump’s detractors are right and this is nothing more than a ploy to get out of the debates, this could prove to backfire more than he realizes right now.

But a very wise man once suggested that an unproven drug and some household disinfectant should get rid of it. I’m sure he’ll be fine, right?