Ahead of the embargo on PS5 impressions videos from a selection of Japanese YouTubers lifting on Sunday, a YouTube thumbnail for one such video contains the first photo of the console in a real-world setting.

We’ve seen plenty of stylized, carefully lit, rendered press shots courtesy of Sony and even a cake masquerading as a PS5, but roughly six weeks away from launch, this is the first IRL snap of the console.

The image appears as part of a placeholder countdown leading to the video’s launch on the channel of Japanese YouTuber ‘赤髪のともの’ (Red-haired friend, according to Google translate). As the description suggests, the video will see the YouTube sample a spot of Astro’s Playroom while sharing their general impressions on the PS5.

As you’d expect, the real-world incarnation looks like what we’ve seen of the PS5 to date and exudes the same bold, flashy design, but free of the overly-sterile look of rendered promo shots.

The Actual Look of the PS5 May Disappoint Some

Sure to disappoint a few fans, the black inner layer emits a glossy sheen that screams tacky plastic — not exactly what you’d expect from a next-gen console launching in 2020. There’s hope the loud glare is due to ambient lighting and won’t be quite so pronounced when the PS5 finds its way into players’ homes in November.

The PS5 stand also appears to be a matte grey, at odds with the black tranche mentioned above, which, to a certain degree, breaks up the machine’s overall aesthetic. 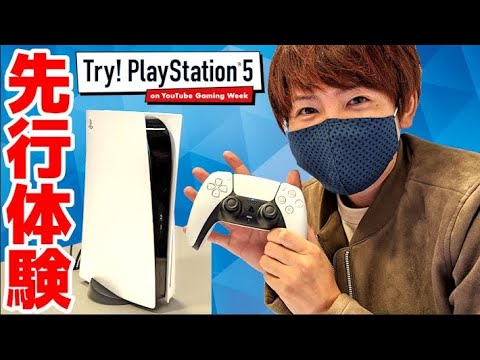 According to the countdown, this particular video goes live on Oct. 4 at 2 am PT/10 am BST. Speculation has the YouTubers sharing the first look at the PS5 UI’s, but the mention of Astro’s Playroom feels uncannily similar to Geoff Keighley’s hands-on in the summer. At least, we’ll land a good look at the console itself.