S&P 500 Just Triggered a Rare Buy Signal – Should You Listen?

After rallying sharply from its pandemic-induced bottom, the S&P 500 fell more than 4% in September, posting its first monthly loss since March.

The U.S. index was dragged down in part by steep declines in mega-cap tech stocks. Facebook, Amazon, Netflix, Microsoft, Apple, and Google-parent Alphabet (FANMAG) all plunged more than 6% for the month.

Many fear a market crash is coming, but they could be wrong. Canaccord Genuity’s Tony Dwyer said in a note Tuesday that the S&P 500 triggered a rare signal that could mean bigger gains to come.

The firm’s chief market strategist noted that at least 80% of all S&P 500 stocks were higher on Monday. These large gains came just after the market index hit a 30-day low as its 50- and 200-day moving averages were still on the rise. This is only the tenth time the market has triggered a “rare thrust signal.”

History suggests it’s still an excellent time to add exposure to stocks. Dwyer noted the S&P 500 had rallied all nine times this signal has been flashed. The S&P 500 posted a median gain of 11% within six months of meeting the signal criteria, according to the firm. Over one year, that median gain jumps to 16.1%. It’s good news for investors who took a hit in September.

While we believe the market should remain volatile ahead of the U.S. election, the combination of our positive fundamental core thesis driven by excess liquidity and a synchronized global recovery … suggests most of the weakness should already be in the rearview mirror.

Low returns on bond investments are forcing investors to pull out of cash and fixed-income and to turn to equities. A strong recovery should also drive the S&P 500 higher. Job numbers and consumer confidence are improving.

Downside risks could slow the recovery. U.S. private payrolls exceeded expectations in September, but declining government financial support and the resurgence of new cases of COVID-19 in parts of the country could slow the job market recovery after the pandemic.

The job market is getting better. But job growth will slow through the rest of 2020 and in 2021. The big gains from business re-openings are fading.

U.S. consumer confidence rebounded the most in 17 years in September amid improving labor market conditions. But it remained below levels that prevailed before the COVID-19 pandemic hit the country at the start of this year.

A weekly unemployment benefit supplement of $600 ended in July and was replaced by a weekly grant of $300, whose funding is already running out.

Households are becoming more optimistic on the labor market and income front, which should support consumer spending in the coming months. However, the possibility that increased unemployment benefits could expire serves as a strong countervailing force.

A record rise in GDP is expected in the third quarter after Q2’s historic drop. Such a strong rebound should drive the S&P 500 higher.

Investors view a contested U.S. election a critical risk to the stock market. JPMorgan thinks the markets are “overly concerned” about the upcoming election.

Watch the video below to see what investors are predicting for the upcoming election: 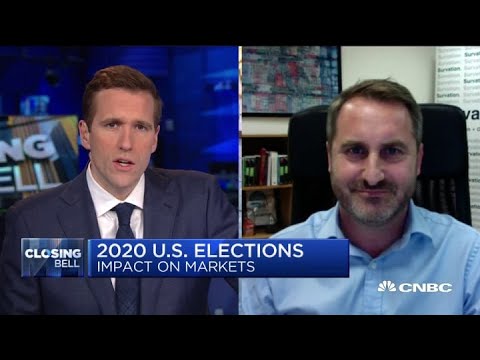 In the near-term, the S&P 500 could see another correction, but chances are good that it will be higher in six to 12 months. We should probably listen to the rare thrust signal.

Disclaimer: This article represents the author’s opinion and should not be considered investment or trading advice from CCN.com. The writer owns shares of Facebook and Microsoft.