For Jerry Jones, winning games is the key, which is why he knows he needs to re-sign Dak Prescott. But it’s not all that matters to him. If he has made one thing clear as the Dallas Cowboys owner it’s this: it’s his team.

He calls the shots.

Jones likes control and power. That’s why Dak Prescott may be making a multi-million-dollar mistake by not toeing the company line anymore when it comes to national anthem protests.

Dak Prescott and the National Anthem—Then

The world waited for someone to test his claim and kneel anyway, but no one did. The outspoken Michael Bennett even stood after he joined the Cowboys. But what was even more surprising to some was how Dak Prescott backed Jerry Jones up: 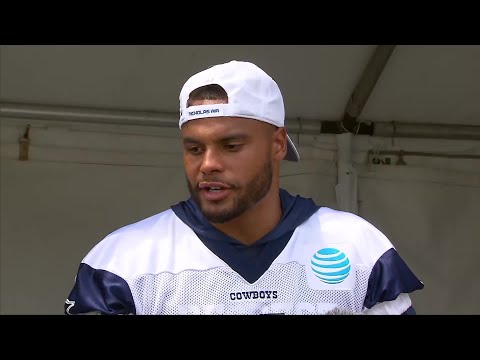 His logic is easy to understand. But since he wasn’t falling in line with what people wanted him to say, he received a lot of flak for appearing to fall in line with what Jones wanted. Some took it as Prescott selling out while others took it as Jones flexing his power as the team’s owner.

Few saw it for it what it was—Prescott speaking his mind.

Fast forward to the present, and the story is a little different. Jones has not given specifics as to what the team’s policy is this year. However, he has expressed his desire for everyone to do something together, much as they did back in 2017.

This time, rather than back Jones up, Prescott is contradicting him. He thinks the choice to protest or not protest should be an individual one:

Dak Prescott believes Cowboys can express themselves as individuals while supporting each other collectively.

Dak: “We’ll all be working toward a common goal—which, in the game of football, is winning. But in life, I think it’s love and equality.” pic.twitter.com/YQayW6DaEl

Could This Impact Future Negotiations?

While Jerry Jones has yet to say anything more than he will listen and have grace, players have said that they have the green light to do as they see fit. If that is indeed the case, then the only thing that will impact the next round of contract negotiations will be how this season plays out.

However, if the past is any indication, Jones could decide that he does not want a quarterback with as much or more influence than himself. By speaking up, Prescott has taken another step towards making the Cowboys his team and expanding his sphere of influence.

Players and fans will follow a leader that stands up more than one who evades questions and speaks in riddles. Should the Cowboys make a deep playoff run this year, the team will become Prescott’s even more.

But can he have grace, see past his ego, and do what’s right by the team? Or will he hold this against Prescott and play hardball during negotiations?

When it comes to Jerry Jones, there’s no telling.