Thursday is a bad day for U.S. equity markets. Stocks fell sharply after the recent rally hit all-time highs. The tech sector, the market leader since the rebound began in late March, is dragging down the whole stock market.

The U.S. Stock Market Is Plunging

The Dow Jones Industrial Average fell more than 2%, the S&P 500 slipped by more than 3%, and the Nasdaq Composite fell by 5%.

After soaring more than 80% from its March bottom, the Nasdaq plunged more than 4% on Thursday. | Source: Yahoo Finance

Apple was the top decliner in the Dow, falling more than 6%. The tech giant is on pace for its worst day since March.

After soaring more than 150% from its March low, Apple stock fell by more than 6% on Thursday. | Source: Yahoo Finance

The S&P 500 tech sector was down 5.6% and was on track for its biggest single-day decline since June 11, when it fell 5.8%. The sector was also heading for its first losing session in 11 trading days.

Someone hit the ‘sell tech, buy dreck’ button and this is creating a bid beneath beleaguered groups, while [tech] gets pummeled. For tech specifically, the stocks are seeing large percent declines, but this comes after a massive recent rally. Tech has been untethered from fundamentals for a while and momentum can work in both directions.

The strong rally in tech stocks has fueled a massive bubble. Most tech stocks are overvalued, so a pause is healthy at this point. Five mega-cap tech stocks make up for more than 20% of the S&P 500, holding up the entire market.

The market is plunging because those mega-cap stocks are falling. Watch the video below: 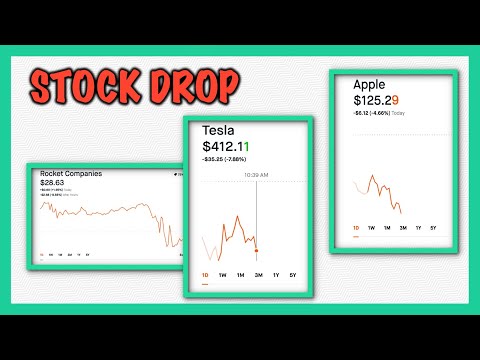 The pandemic has created a frenzy for tech stocks, as more people work at home and rely on technologies. As the economy recovers, we might see a shift towards other sectors that will benefit from the recovery, such as travel stocks. The stock market rally is an illusion because it is concentrated into only a few stocks. A rotation to other sectors will result in a more sustainable rally.

There is a sort of benign way that this excess can be corrected through a process of rotation.

She said positive economic data could pave the way for a more sustainable rally. Thursday’s economic reports continued to point to a steady recovery. But the economy is still considerably weaker today than it was before the pandemic. Millions of Americans remain out of work, Congress is deadlocked on another financial aid program, and many industries such as travel struggle to survive.

Unless more cyclical sectors like banks, energy, and health care take over from technology, the risk that the tech and speculative growth stock bubble will pop as it did in 2000 is increasing everyday day. The correction we saw on Thursday might be just the start of the bubble popping.

Disclaimer: This article represents the author’s opinion and should not be considered investment or trading advice from CCN.com. The writer owns shares of Microsoft.