If Tom Brady doesn’t win a seventh Super Bowl this season, he won’t be able to say it was because the Tampa Bay Buccaneers didn’t give him everything he needed.

Brady is out to prove he can win the big one without Bill Belichick looking over his shoulder. He chose his next destination well after leaving the New England Patriots, landing in Tampa, where the supporting cast is the best Brady’s had in years.

The Bucs are adding the final piece of the puzzle by handing a one-year deal to recently released running back Leonard Fournette:

Those incentives are a smart move. They’ll protect the Buccaneers if Fournette’s form slumps the way it did at times with the Jacksonville Jaguars.

That likely won’t happen, though, not when Fournette reminds himself he’s traded playing with Gardner Minshew for taking handoffs from TB12. The two-time 1,000-yard rusher already appears excited about suiting up for his new team:

Fournette is raring to go after leaving a losing program in Jacksonville for a Super Bowl contender in Tampa. | Source: Twitter

You can’t fault Fournette’s enthusiasm, but it’s Brady who should be more excited. Fournette is the final piece for a Super Bowl run in 2020.

Too Many Weapons for Defenses to Handle

Adding Fournette gives Brady and the Bucs a genuine, ground-and-pound runner. He’ll be the physical complement to a potentially explosive passing attack.

Brady does not lack for options through the air. Mike Evans is a premier deep threat on the outside, while fellow wideout Chris Godwin is a catch machine who will instantly form a rapport with one of the most accurate passers in NFL history. Watch the video below. 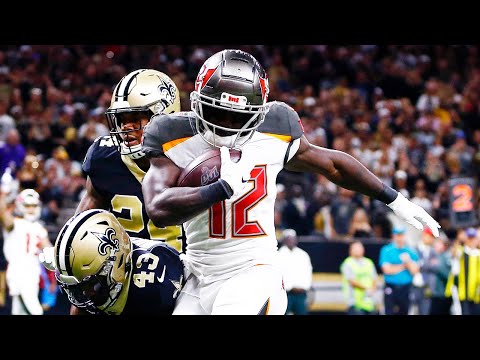 Then there’s the Gronk. Brady was fiendishly brilliant when he coaxed good pal Rob Gronkowski out of a brief retirement. The all-world tight end is still a playmaker every defense on the Bucs’ schedule will fear.

Opponents looking to double Gronkowski will only make it easier for Brady to look for his other tight, O.J. Howard. The dynamic 25-year-old has breakout potential in 2020.

Double Brady’s inside receivers, and he’ll exploit Godwin or go vertical to Evans. Add in pass-catching back LeSean McCoy, and defenses won’t be able to cover all of Brady’s weapons.

Fournette and McCoy give Brady a dangerous one-two punch in the backfield. | Source: Twitter

Fournette will be the oil in the engine. He had his problems with the Jaguars, but his production remained high.

Reports of Brady’s decline have been greatly exaggerated. Yes, he’s 43, and his arm strength isn’t what it was, but Brady is still a cut above most NFL quarterbacks.

His numbers from 2019 weren’t up to his usual excellent standards. Brady averaged just 6.6 yards per pass, his lowest total since 2013, but he still topped the 4,000-yard mark and threw for 24 touchdowns. Watch Brady in action:

He put up those figures leading a Patriots offense bereft of talent. Gronk had retired, leaving Julian Edelman facing double and triple coverage every week.

There is a better array of talent around Brady in Tampa than when he last won the Super Bowl with the 2018 Patriots. It’s scary to think about how prolific Brady will be in this offense.