Meghan Markle Backed Clinton in 2016 – Is Her Next Endorsement Doomed?

It seems that fans of Meghan Markle, not to mention certain sections of the mainstream media, are losing their collective minds over the former royal being outspoken on the upcoming US elections.

You’d think that no other celebrity figure ever made their political opinions known.

You’d think that Meghan Markle had never made her political opinions known.

That’s right, Meghan was as outspoken back in 2016 as she is just now.

Meghan Markle has never been a fan of Donald Trump

To the surprise of absolutely no one, Meghan Markle is no fan of Donald Trump. Hey, she’s not alone. Trump has more than his fair share of critics.

Back in 2016, when the current US President was considered a long-shot to beat seasoned politician Hillary Clinton, Meghan made her views known on The Nightly Show with Larry Wilmore.

So repulsed by the idea of a Trump presidency was the Duchess of Difficult that she hinted at leaving the country if he won:

We film Suits in Toronto, and I might just stay in Canada.

Of course, this was never going to be the case. Celebrities, much like politicians, love nothing better than waxing lyrical about their convictions. But when push comes to shove, they’ll do nothing to jeopardize their career and the ability to earn money.

Meghan has never been a fan of Donald Trump. | Source: Twitter

Why do you think Meghan Markle, with the gullible Prince Harry in tow, was so desperate to return to the US this year?

And yet here you are, Meghan.

You dumped your beloved Canada like you would a former husband who doesn’t have enough money.

Meghan Markle has befriended the losing side in an election before, watch the video below: 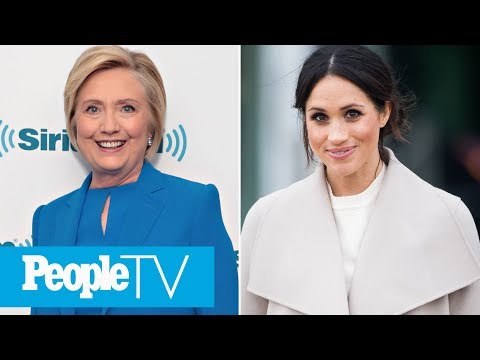 Does being told what to do by someone like Meghan make people want to vote?

I ask that question because I recall Hillary Clinton enjoying the support of people like LeBron James, Lady Gaga, and Beyonce during her campaign for the White House.

In the end, that celebrity support did nothing for her. In fact, it’s believed in some circles that it was more of a hindrance than a help.

Meghan Markle recently spoke out on being part of the When We All Vote campaign alongside former president Barack Obama’s wife, Michelle, saying:

Now, I’m not sure that using the word “complicit” is really the best idea when you’re trying to convince ordinary people to vote.

The term has negative connotations, and indeed is defined as:

Involved with others in an activity that is unlawful or morally wrong.

Meghan Markle calling into question the moral behavior of others? That’s a bit rich, isn’t it?

And that goes for almost all celebrities. They worship at the altar of money and fame. Morals aren’t something in ready supply on the streets of Los Angeles or Santa Barbara.

Meghan and Michelle Obama are telling ordinary people what to do. | Source: Twitter

Casting our minds back to 2016, Meghan Markle was pushing the anti-Trump agenda hard:

Yes, of course, Trump is divisive, think about female voters alone, right? I think it was in 2012 the Republican Party lost the female vote by 12 points. That is a huge number and was as misogynist as Trump is, and so vocal about it, that is a huge chunk of it.

Meghan was pretty open about her support for Hillary Clinton, commenting:

You’re not just voting for a woman if it’s Hillary. Yes, you’re voting because she’s a woman, but certainly because Trump has made it easy to see that you don’t really want that kind of world that he’s painting.

I don’t know about you, but I won’t vote for a political candidate just because “she’s a woman.” She may be a terrible choice. Indeed it seems that Meghan’s message back then didn’t really work.

Someone ought to tell these guys that just like celebrity endorsements, social media follower numbers don’t win elections. | Source: Twitter

Will it work this time? I’ll leave you with the words of Ronnie Cho, former associate director of public engagement for the Obama administration:

A healthy skepticism young people have for people telling them what to do and telling them how to think makes it harder for even the most followed person on Twitter, like Katy Perry, to turn out people to vote.

If someone like Katy Perry couldn’t make a difference, what makes Meghan Markle think she can? Aside from her sizeable ego, of course.