The Dow Jones rallied on Tuesday as a buoyant U.S. housing market continues to go from strength to strength. One JPMorgan strategist believes that tech dominance could soon fade as valuations look unsustainable.

The tech sector led the major U.S. stock indices on Tuesday, as the Nasdaq rallied 1% while the Dow Jones and S&P 500 posted more moderate gains.

Economic data were upbeat, as the ISM manufacturing PMI beat forecasts. Demonstrating a continued rebound in economic activity, manufacturing and the broader economy are in recovery mode.

One area that is providing a substantial boost to risk sentiment is housing-market stability, as property values surged to two-year highs in July.

There is no question that many of the consumer reliant stocks in the Dow 30 would not be trading so smoothly if there were also a foreclosure crisis rumbling on in the background.

The Federal Reserve now has tremendous control of the mortgage market, having bought up nearly a third of the bonds backing them.

Utilizing this degree of control, Jerome Powell’s central bank can artificially lower mortgage rates, providing some much-needed stimulus to the economy. Unfortunately, the ramifications of killing the free market in favor of ever-rising prices will likely keep house prices elevated and out of reach for most Americans.

The federal government’s efforts to freeze foreclosures and various mortgage bailout programs have also helped stave off a 2009-style housing crash. If housing supply recovers from the pandemic lows, it isn’t clear if current prices are sustainable. Watch the video below. As we get closer to the November election, Wall Street is paying closer attention to politics. Joe Biden’s $300 million fundraising haul has raised a few eyebrows, as Obama’s VP rakes in cash, giving him a war-chest to deal with Trump’s historic cash pile.

The war raging on the pollster front is whether Trump’s numbers are improving based on civil unrest, or if things are more static than they appear. Wall Street certainly seems to believe that the White House’s chances of reelection are improving.

As Apple (NASDAQ:AAPL) dominates the Dow 30 with another 3.5% gain to fresh all-time highs, the tech sector is going from strength to strength. Watch the video: 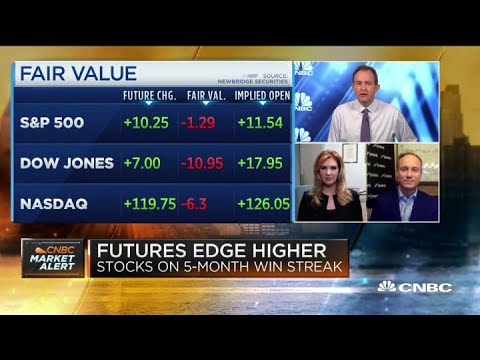 JPMorgan strategist Marko Kolanovic believes that this dominance may be short-lived, with beaten-down value stocks closing the gap as blue-collar makes a comeback,

We are seeing a ‘K-shaped’ recovery,” where political decisions not to reopen the economy kept people at home — and sent the tech sector 20% above all-time highs. It is simply not sustainable long-term. We think convergence “is ahead of us.

It was indeed a high profile day for Mr. Kolanovic to make his claim, as Dow newcomer Salesforce.com (NYSE:CRM) rallied 1.6%, and Walmart (NYSE:WMT) exploded 6% on the launch of its Walmart+ online delivery service.