Since we began seeing excerpts from the Meghan Markle and Prince Harry biography, Finding Freedom, I have believed that the book aims to portray Meghan positively at the expense of all else.

It’s clear to anyone with a reasonable level of intelligence that the groundwork was laid for Harry being the scapegoat should the couple’s attempts at “finding freedom” prove unsuccessful.

Is Meghan Markle a Strong, Independent Feminist? Or a Shrinking Violet?

When it comes to Meghan Markle, the messages we get are most definitely mixed. And confusing.

Is she the strong, independent feminist who was too much of a character for the dastardly old royal family to handle? Or a shrinking violet on the verge of tears because she couldn’t handle the pressures of royal life?

I ask because it seems Prince Harry is being criticized for not preparing Meghan Markle for royal life and failing to protect “emotional” Meghan during her time as a royal.

For a strong feminist, Meghan seems easily upset by the most trivial of matters.

Prince Harry is under attack from Meghan’s fans. | Source:  Twitter

Was Meghan Told Not to Smile at the Cameras? I Don’t Think So

According to Finding Freedom, a senior Palace aide told Meghan not to engage with the media and “not to smile at the paparazzi, which they claimed would egg on the photographers.”

I don’t know if I buy that claim. I’ve seen all number of royals during events surrounded by photographers, and each time they’ll be smiling and chatting away.

Unless, of course, this was part of the evil plan to dampen Meghan’s appeal? A conspiracy to stop Meghan flashing that winning smile to the cameras?

Whatever the aim, it seems that the supposed request upset Meghan Markle. The poor little soul. Upset because a royal aide told you not to engage with the media.

The authors of Finding Freedom would never think of questioning Meghan Markle herself, but everyone around her is fair game. Be it her father, the media, the British public, the royals, and even Prince Harry himself.

Meghan was clearly unable to adapt to royal life, which is perfectly understandable. It’s a high-pressure environment and one that few people are cut out to handle. Not everyone can be a Kate Middleton, and that’s fine.

But with all and sundry around the former royal couple refusing the lay any of the blame at Meghan’s door, we see the blame attributed elsewhere.

According to The Express, fans are beginning to speak out against the wayward younger Prince, claiming:

Harry failed to prepare her – either due to her ability to act, thinking she’d be able to adapt quickly or due to fear of losing her or due to god knows what. But he failed her.

Will Harry face the brunt of Meghan’s inability to last as a royal? | Source: Twitter

Anyone who believes that Meghan Markle wasn’t given support during her time as a royal is deluded. Even Meghan’s cheerleader Omid Scobie admits as much in Finding Freedom, writing that the Queen had given Meghan Markle a “master class in training”:

She made sure Meghan knew what was going on and made her feel very much at home because it was her first trip.

Watch the Queen shows Meghan Markle the ropes early on in her royal life! 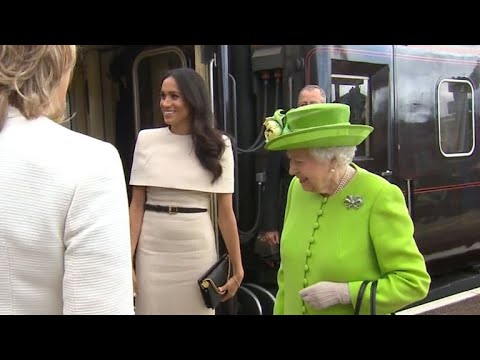 In an interview with The Cut, Scobie even grudgingly had to admit that Meghan did receive support from the royal family:

When we look at the immediate royal family, I think they clearly did support Harry and Meghan to some extent.

To some extent? What exactly was she looking for? Surely a strong feminist like Meghan should have been taking inspiration from the ultimate feminist in the Queen and rolling up her sleeves and making the role her own?

I’m not sure crying because someone told you not to smile is the mark of someone cut out for a high-pressure role in the most famous family on the planet.

Tucked away in Santa Barbara is probably the best place for the poor girl.