Corona-times have proven to be beneficial to comedian Trevor Noah. Despite filming from his New York City apartment, his transformation of “The Daily Show” has increased viewership by more than 50 percent. The show was one of the first to adapt to quarantine-life, likely contributing to its success.

It’s not all rainbows and butterflies for the talk show host, though. Comments Noah made in a recent interview have some concerned for the future of the United States.

Over the years, Noah has offered insight into what it was like growing up under apartheid in South Africa. Few could have predicted that he would one day compare his experiences to life in the United States. Here’s what he had to say on the subject:

“Living in this period in America, as much as I hate to say it, a lot of the things that I’m seeing are similar to what we experienced in South Africa. Mass unemployment, a government that doesn’t seem to have the best interests of the people at heart. People who are getting angrier and angrier.”

Is he right? Is the United States no longer The Land of the Free? 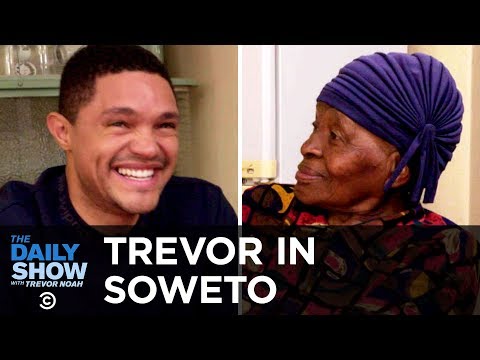 Before the law enforced apartheid, it was upheld by social customs. Despite whites being the minority, racism against black people in South Africa was widely accepted. After gaining their independence, The 1913 Land Act was passed that prevented black Africans from working as sharecroppers and forced them to live in designated areas.

South Africa was in serious debt after The Great Depression and World War II, leading to stricter laws surrounding racial segregation. Many white citizens agreed with the Nazi motivation to keep their race “pure,” which led to the creation of the white supremacist political party, Afrikaner National Party. They won the general election in 1948 after using the slogan “apartheid” (meaning “apartness”) to appeal to white politicians, police, educators, and more.

Their win led to stricter laws, including those prohibiting mixed-race marriages or sexual relationships. Everyone was categorized by race and segregated accordingly. Parents who had mixed children were often separated from their families. Whites received 80 percent of the land, while black Africans were forced from their homes to live in overcrowded communities in poverty. Things only grew worse from there.

Similarities To The US Today

Trevor Noah has certainly nailed it on the head. There are quite a few similarities between South Africa under apartheid and the United States today. The unemployment rate for 2020 peaked in the US at 14.7 percent back in April. Fortunately, it has been steadily declining ever since. On the other hand, South Africa peaked at 22.89 percent in 1994, which marked the end of apartheid. However, their unemployment rates have steadily increased since then.

Noah has also talked about how living in a police state meant people were constantly under surveillance, and snitching was encouraged.

“People were encouraged to snitch. It was a police state, so there were police everywhere. There were undercover police; there were uniformed police. The state was being surveilled the entire time, you know, communications were monitored and anyone could snitch.

The moment President Donald Trump moved into the White House, he began to push a zero-tolerance policy within ICE and encouraged people to turn in any illegal immigrants. Between home and business raids, the lives of many American immigrants have been turned upside down. Except, only Mexican immigrants are being targeted.

Many believe the United States is becoming a police state, and their recent response to protests verifies that belief. People are being arrested, and some are murdered simply because of the color of their skin. Noah describes having to hide as a kid when the police came around because being mixed-race was illegal at the time. Is that not how immigrants and people of color react when they see an officer nearby?

Social Customs In The US

There may not be segregation laws currently put in place in the United States, but that doesn’t mean we don’t enact them ourselves. Just like South Africa prior to apartheid, we have a system designed to ensure people of color stay out of politics and positions of power. Systematic racism keeps them out of certain neighborhoods, universities, and professions. It keeps them uneducated, underemployed, and constantly in survival mode. They fuel our economy from behind bars, yet we refer to them as “criminals” and “lazy.”

In my opinion, we’re far worse than South Africa was during apartheid. At least they were upfront about their bias and racism. Here in the United States, we pretend racism ended with slavery and hide behind the laws that were created by shady politicians with ulterior motives.

Trevor Noah may try to hide his intelligence behind his jokes, but I see you!