Carson Wentz has been struck down by injury in each of the last three seasons with the Philadelphia Eagles. Head coach Doug Pederson should prepare for more misery where his brilliant but brittle quarterback is concerned.

Wentz’s chances of playing every game for the Eagles in 2020 disappeared when left tackle Andre Dillard suffered a season-ending injury on Thursday:

Dillard’s injury has further weakened the protection in front of Wentz. | Source: Twitter

Does Jason Peters Have Enough Left?

The Eagles’ O-line was already thin after core players were hit by injury or walked in free agency. Those issues prompted Philly to take 38-year-old Jason Peters out of mothballs.

Peters was penciled in at left guard. Now the veteran, no stranger to injuries himself, will be Wentz’s blindside protector again.

When he’s healthy Peters is an exceptional tackle. He possesses rare athleticism for a big man.

Peters can still go, but for how long? | Source: Twitter

An in-form Peters may even be an upgrade over Dillard, who muddled his way through an indifferent debut season after the Eagles made him a first-round pick in the 2019 NFL draft.

He was still struggling before his injury, according to Glenn Erby of Eagles Wire:

During a fully padded Eagles’ practice on Wednesday morning, Carson Wentz was dropping back to pass when Dillard was bull-rushed back into the quarterback’s knee by Joe Ostman.

It was a scary sight and speaks to the fragility of Dillard and Wentz’s relationship, as they go hand in hand.

Wentz has a better rapport with Peters, but neither man has been able to stay healthy. Peters has failed to start all 16 games six times in his ten seasons with the Eagles.

A swing tackle with size and aggression would be invaluable for a team suddenly looking thin in a vital area:

The Eagles are lacking options in front of Wentz. | Source: Twitter

Eagles Still Go Only as Far as Wentz Takes Them

How much Peters has left in the tank is one more worry about an already fragile situation at quarterback. Wentz tore his ACL in 2017, the year the Eagles won the Super Bowl, then he missed five games with a back problem in 2018.

Some, including former NFL quarterback Dan Orlovsky, feel Wentz doesn’t get the respect he deserves. Watch the video below. 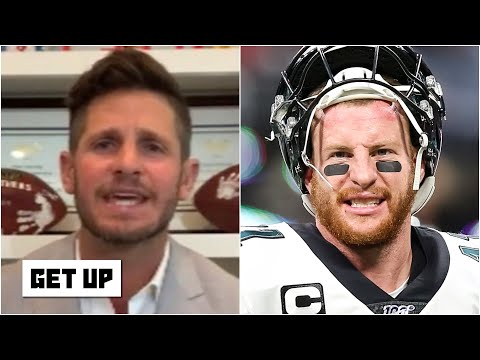 Injuries always cast a shadow, and a concussion sent Wentz packing in the playoffs against the Seattle Seahawks. He left the field after being decked by Jadeveon Clowney. Josh McCown filled in, but Wentz’s injury was the main reason the Eagles were one and done in the postseason.

The early exit was probably on Pederson’s mind when he drafted Jalen Hurts in the second round.

Pederson’s kidding himself if he thinks the Eagles can win with Hurts or Nate Sudfeld in 2020. This is still Wentz’s team, so it’s bad news his chances of staying upright have already taken a potentially fatal hit.