Blake was shot by law enforcement while trying to enter his vehicle this past Sunday. According to police, Mr. Blake was seen reaching for a knife, but Jacob’s family attorney has told CNN that Blake did not have a weapon in the car.

The incident happens approximately three months ago to the day that Mr. Floyd was murdered at the hands of police in Minnesota. What is happening in our country? I don’t have the proper words to explain it — it’s simply nauseating.

Before going up 3-2 in their first-round NBA playoff series against the Mavericks on Tuesday night, Coach Rivers of the L.A. Clippers was basically shaken to tears when discussing the shooting of Mr. Blake in Wisconsin. I certainly can’t blame him. In fact, I feel for him. We all should. Watch the video below: 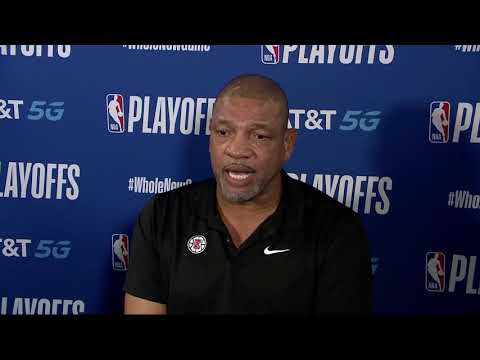 Doc Rivers’ Insight Should Inspire All of Us

Coach Rivers opened up his heart and soul to us, and we must listen. Rivers said:

I’m sorry, but the quote tells the entire story.

Instead of talking about what a huge win over Dallas would mean for the Clippers’ chances to send the Mavs’ packing come Thursday night’s Game 6, Rivers is having to discuss yet another act of racial injustice in America. Give me a break.

This video is disturbing. View at your discretion. If Black lives truly matter in the United States, police officers must be trained differently and recruited with higher ideals in mind.

My dad was a cop. I believe in good cops. We’re not trying to defund them and take all their money away. We’re trying to get them to protect us, just like they protect everybody else.

C’mon, people. This isn’t hard. Let’s give back the power to coaches like Doc Rivers, and allow him to be just a basketball coach. Not a spokesperson for racial inequality.

Coach Rivers, in his own words, added:

It’s really so sad. I should just be a coach.